The Regional Oversight Committee on Barangay Drug Clearing (ROCBDC) convened on May 19, 2021 at the Conference Hall, La Union Police Provincial Office, Camp Diego Silang, Carlatan, City of San Fernando, La Union for the presentation of updates and validation of Barangays with Drug Cleared Status. Also, PDEA Agency Memorandum Circulars were discussed for the information and guidance of the members.

A validation of 312 barangays with Drug Cleared Status was done through the issuance of a resolution by the Committee ( Ilocos Norte - 76, Ilocos Sur - 93, La Union - 77 and Pangasinan - 66). 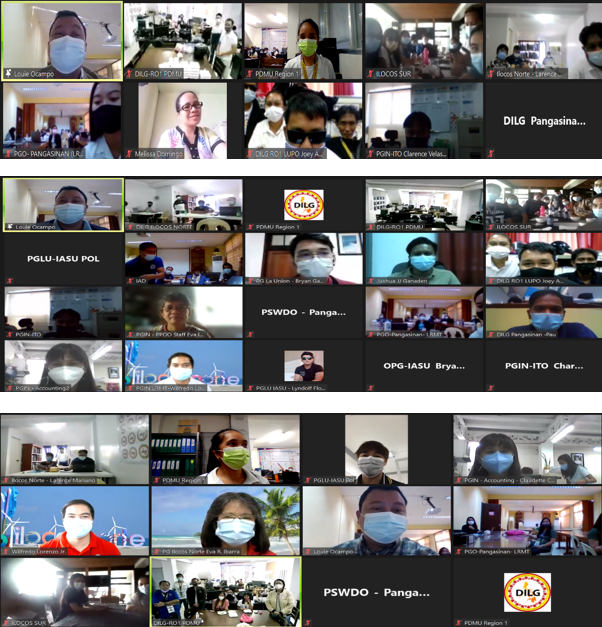 PRINCIPLES AND PROCEDURES ON RISK-BASED INTERNAL AUDIT FOR PLGUs

The Project Development and Management Unit (PDMU) of DILG RO1 hosted a 4-day virtual training entitled, PRINCIPLES AND PROCEDURES ON RISK-BASED INTERNAL AUDIT FOR PLGUs. Under a partnership between the Department of the Interior and Local Government (DILG) and the Department of Budget and Management (DBM) that aims to partly address the poor state of provincial roads across the country and to improve the capacity of provinces in local road management and incorporating reforms and financial management, The Conditional Matching Grant to Provinces (CMGP) was created. It also aims to enhance the Provincial Government’s competency in Local Road Management (LRM) systems and processes, incorporating governance reforms in Public Financial Management (PFM). One of the Key Reform Areas under PFM embedded in the Provincial Governance Reform Roadmap is on internal audit systems and practices. This intention is for LGUs to recognize the internal audit function in improving their operation and strengthening their institution. The objective of this activity is for the Provincial participants to have a deeper appreciation of the goals and objectives of the Principles and Procedures on Risk-Based Internal Audit that will provide them a more profound commitment to its development and implementation. Also, to introduce LGUs to risk-based approach to redefine and refocus audit activities.

The activity was opened by a welcome remark by DILG RO1 Regional Director, James F. Fadrilan. The CMGP Secretariat discussed the objectives and activities to be undertaken for the training and the methodologies to be used in presentations and open forum. Mr. Louie F. Ocampo discussed the overview of Principles and Procedures on Risk-Based Internal Audit, its objectives and importance, and the Roles of Local Road Management Team. Afterwards, a workshop was conducted and each province presented their output on Internal Audit Strategic Planning, Risk-Based Annual Audit Planning, and Individual Engagement Issues and Practices. Mr. Ocampo used a rubrics to gauge outputs at the end of all presentations. After which, critiques/ revisions were discussed by Mr. Louie F. Ocampo who also gave each province enough time to revise their work depending on the comments given.  Each province submitted a corrected copy at the end of the session. Before concluding the virtual training, participants were given their certificate of attendance for being part of the training and PDMU Staffs ended the activity with a closing program. (IO II Dann Ariel S. Genese) 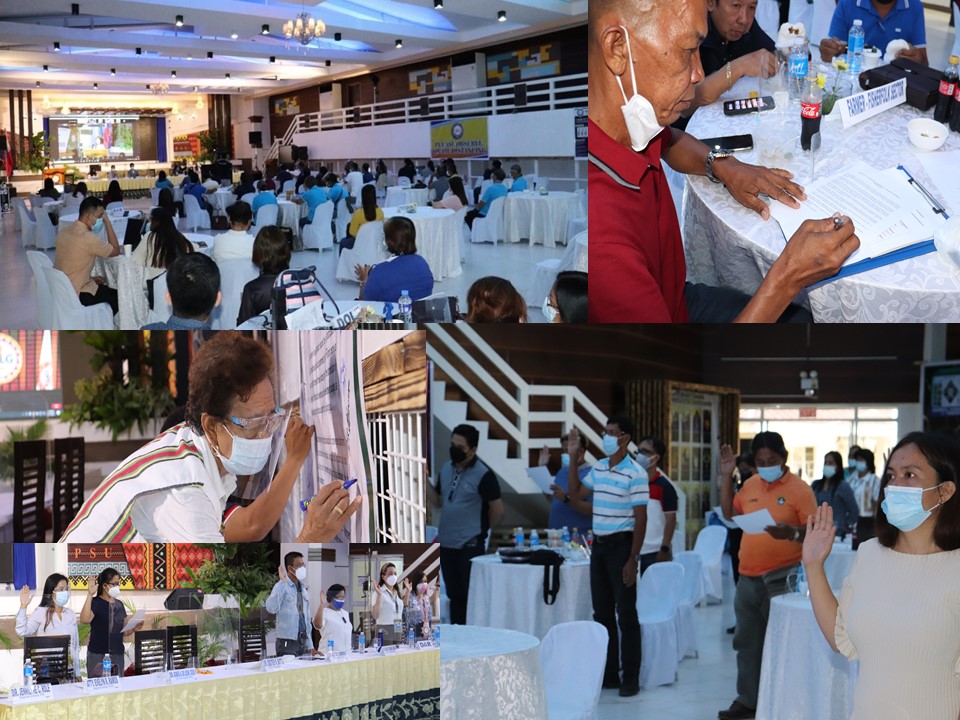 LINGAYEN, PANGASINAN – The Regional Task Force 1-ELCAC, spearheaded by NTF-ELCAC SUCBEM Cluster, conducted the Ilocos leg for the series of Regional Conferences on Peace and Development (RCPD) on May 27, 2021 at Pangasinan State University Conference Hall, Lingayen Pangasinan. This activity was the first phase of the SONA Campaign Plan of the President.

The event was attended by representatives from various sectors of the community such as Indigenous Peoples (IP), Laborers, Farmers, Fisherfolks, Peasants, Women, and the Youth. It was conducted in a controlled and well-managed face-to-face conference with standard health protocols being employed throughout the activity.

The activity intends to provide a framework for advocacy of legitimate sectoral issues and concerns, validate governance and development gaps of communities and identify needed government interventions to address them. This also provided an avenue for the sectors to lobby sectors’ social reform agenda and for government agencies with sectoral mandates to regain its role as champion for protection and promotion of peoples’ right and welfare.

The activity was graced virtually by CORDS-1/NSA Secretary Hermogenes C. Esperon, Jr... In his opening message, he reiterated that the RCPD is the first of the three phases of the SONA Campaign Plan and that inputs of the sectoral participants are vital in crafting the Peace and Development Agenda that shall be used as reference for the formulation of policy recommendations to address the gaps in governance.

Moreover, ARD Agnes A. De Leon, representing the DILG, sets the tone by discussing thoroughly the RCPD, with its objectives and goal setting, in relation to the pre-SONA Campaign Plan.

Along with attendees from the national government agencies, all sectoral representatives took an oath by reading the manifesto – expressing their full commitment to the shared advocacies towards peace and development. This commitment was sealed by a ceremonial tarpaulin signing.

The DILG Regional Office No. 1 conducts a Trainers' Training on Anti-Violence Against Women and their Children (AVAWC) on May 11-13, 2021 via Zoom for Ilocos Norte LGUs and Ilocos Sur 1st District LGUs which is Component 1 of the Regional CapDev Initiative. The activity aims to provide a better understanding of the salient features of Republic Act No. 9262 or AVAWC Act of 2004, empower local functionaries and enable them to share substantial knowledge to others on how to respond accordingly to VAW cases.

Component 2 of this Regional CapDev Initiative is the Barangay Roll-Out which will be conducted by the City/Municipal Trainers Trained in partnership with the Liga ng mga Barangay.

The Regional Oversight Committee on Barangay Drug Clearing (ROCBDC) convened on May 19, 2021 at the Conference Hall, La Union Police Provincial Office, Camp Diego Silang, Carlatan, City of San Fernando, La Union for the presentation of updates and validation of Barangays with Drug Cleared Status. Also, PDEA Agency Memorandum Circulars were discussed for the information and guidance of the members.

A validation of 312 barangays with Drug Cleared Status was done through the issuance of a resolution by the Committee ( Ilocos Norte - 76, Ilocos Sur - 93, La Union - 77 and Pangasinan - 66). 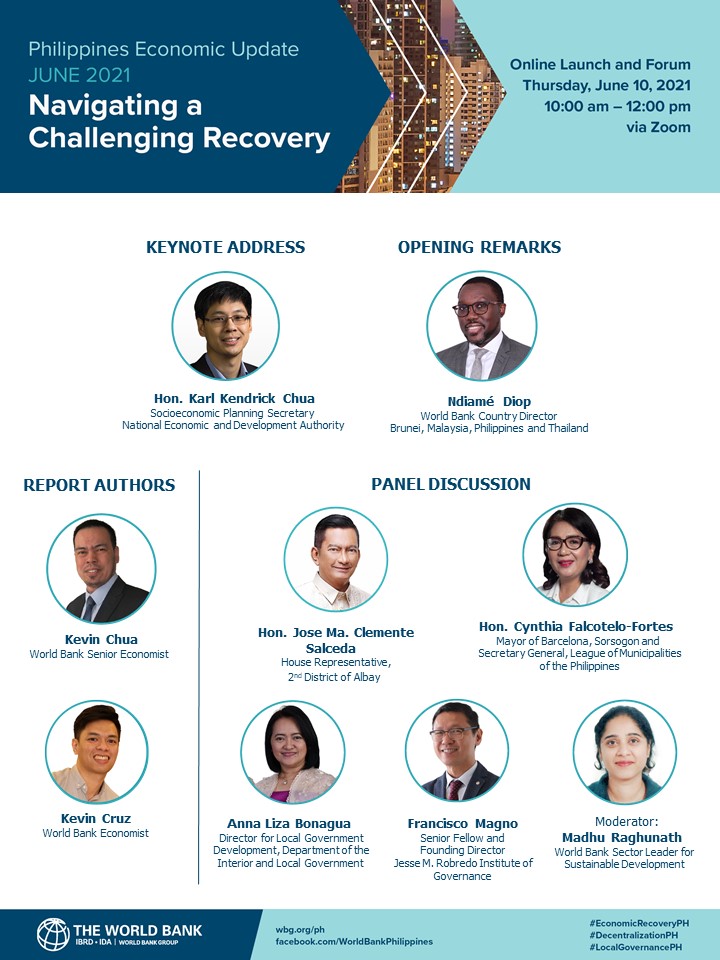 The World Bank will be conducting the Philippines Economic Update June 2021: Navigating a Challenging Recovery Online Launch and Forum on 10 June 2021, 10:00 AM - 12:00 PM, via Zoom. Said event will also be simultaneously livestreamed via the official World Bank Facebook page.

The Philippines Economic Update June 2021 Forum covers recent economic and policy development and growth outlook for the Philippines to include (i) presentation on the study on the fiscal performance of local government units (LGUs) and implications of the implementation of the Supreme Court Ruling on the Mandanas-Garcia petitions; and (ii) panel discussion on the opportunities, challenges, and policy options in the devolution transition.